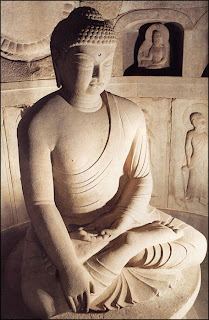 Saturday is Buddha’s Birthday, a day of great celebration in many parts of Asia. For many of us living there, it was a good day to have off and roam around and see the city of Seoul decked out in colorful lanterns.

Even if you are not Buddhist, which I am not, some of these thoughts are provoking and just lend themselves to some spiritual introspection.

“All things appear and disappear because of the concurrence of causes and conditions. Nothing ever exists entirely alone; everything is in relation to everything else.”
-Everything is relative to everything else. No great surprise here, in spite of pronouncements of absolute truth, of moral absolutism, of perceived social clarity. We exist in relation to others, in fact our very existence and creation (as well as our eventual destruction) is determined by our relation to other(s). Beyond no man being an island, perhaps no man is a man. We are singular in thought, in our thoughts relation to our experience. However, our thoughts, our experiences and our prescriptive courses of action are not singular; they are indeed shared. Proper thought and course of action occurs first in that singularity of self, but that does not mean it is novel. Nor should novelty ever be pursued for its own sake. Rather, action, existence itself should be grounded in condition. How does this thought, this action meet the conditions of this very present? How does this better or worsen me, and with me, all of us?

“Ambition is like love, impatient both of delays and rivals”
-This particular quotes resonates with me. Frustration stemming from delay is a signal that something is out of sync, either you with this world, or you with your self. I imagine Buddha would think those are one in the same.

“An idea that is developed and put into action is more important than an idea that exists only as an idea.”
-This is interesting as well, lest we all think that Buddhism resides entirely in the mind. Buddhism is a course of action as well as thought, a prescription and a cure. It is the mind and body acting as one, the goal of any major religion.

“Believe nothing, no matter where you read it, or who said it, no matter if I have said it, unless it agrees with your own reason and your own common sense.”
-Believe the message and not the messenger. Intense introspection will lead to understanding which will fortify logic and common sense. Then we can face the world comfortable with our reasoning and our ability to discern fact from fiction. Once again, a strong parallel with other religious chains of thought.

“Chaos is inherent in all compounded things. Strive on with diligence.”
-This is perhaps my favorite quote of all time. Chaos is a naturally occurring concept, one that will always be present when anything exists in multiples, not as singularities. Chaos is neither positive nor negative (there is nothing either good or bad, but thinking makes it so-Hamlet), but an indication of individual determination to extract logic from chaos. There is method to madness, patterns in the noise, structure to be had and built upon. Chaos is inherent but not a sole determinant.

“Ennui has made more gamblers than avarice, more drunkards than thirst, and perhaps as many suicides as despair.”
-How beautifully modern a thought. Ennui is an extreme form of lethargy, of listlessness, of apathy. It is like freezing to death, slowly and often without violence. But it always meets a violent end. Passion need not be tempered to the point of dullness, a vibrant mind need only focus thought, concentrate the intensity, the passion on a single conscious thought for it be filtered. The strongest current flows through the smallest crevice. The passion that flows from the soul is like water on a rock, useless if not channeled. The passion that flows unregulated will lead to disillusionment, despair, ennui. The existence of passion alone does not justify its presence, its usefulness. It simply is. It is a means to a greater consciousness, a tool for focus, for clarity. It is the strength in which meaning is conveyed, the power of the strong current.

“Even death is not to be feared by one who has lived wisely.”
-Amen to that. I am not sure of a religion that would disagree. Death is the most natural of progressions. And nothing stops at death. Whatever you might believe, even at the most primitive of transformations, essence is merely rearranged at death. Physically, spiritually, in relation to this world, in relation to ourselves. Death is a moment of reorganization, the continuation of the ennobling journey. It is natural to fear it, as it is dramatic, entirely different than experience to that point, yet it is represented daily on a massive scale in all that is around us. It is constantly reiterated and framed and presented in a myriad of forms, impressions, tones. The one thing I am certain of, both logically and emotionally, is that nothing stops at death. All our clusters of self are reorganized in different forms. Your collected wisdom is not lost in the ether; it feeds the root of humanity, builds verse upon the ancient epic, it carries with you in whatever, wherever you might find yourself.

The image comes from the Korean Buddhist shrine of Seokguram (석굴암) located in Gyeongju, South Korea. It is officially listed as a UNESCO World Heritage Site and sits high on a mountain overlooking both the East Sea and Gyeongju itself, 750 meters above sea level. It is an impressive construction feat for any time in history, more so for the fact that it was constructed using granite brought from other areas of Korea in 750. It is considered to be one of the finest Buddhist sculptures in the world and truly personifies the Korean view of Buddha, as opposed to the thinner or fatter versions found in other countries. If ever you make it Korea, Gyeongju and Seokguram should be high on your list of things to do and see.