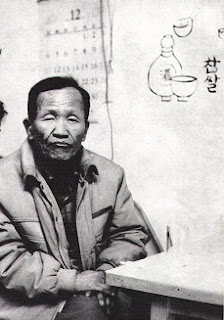 When Ch’ŏn Sang-Pyŏng left this world on April 28, 1993, it was a long-rehearsed departure. He had already left the world a first time in his childhood, when he fell over a cliff but survived after being caught in the branches of a tree. A second departure came in 1967, when the agents of the National Security Agency (KCIA) whisked him away to the dreaded cellars of their building in central Seoul. There he was subjected to torture by water, and also by electric-shock applied to his genitals. His name had been found in the address-book of a friend from university days, a friend who was now accused of being a communist spy after visiting the North Korean embasy in East Berlin. After six months in detention, he was finally freed, having nothing to confess except the fact that he had friends. As a result of the electrical torture, the poet would never be able to have children.

Born in early 1930 in Japan, he returned to Korea with his family in 1945 and resumed his interrupted schooling at Masan. The first of his poems to be published was the poem “Rivers” that appeared in the monthly review Munye in 1949, when the poet was still at school. By 1952 he was established as a poet, with recognition from already reputed writers. By this time he was studying at Seoul National University. After finishing his studies there, he worked for a while in Pusan. In addition to writing poems, he had also already begun to compose literary essays that were published in various periodicals. They constitute the other important aspect of his life’s work as a writer.

Not very long after being tortured, Ch’ŏn Sang-Pyŏng seemed really to have died. Deeply traumatized by the violence he had undergone, he began to roam about, drinking wildly until at last, in 1971, he disappeared. Months passed, his friends and relatives searched for him everywhere to no avail. They could only conclude that he had died and been buried somewhere anonymously, unknown. In sorrow, they collected the poems they could find, and published a posthumous memorial volume.

Ch’ŏn Sang-Pyŏng’s career may have been marked by a series of deaths, it is also a story of multiple resurrections. Suddenly news came that he was alive after all, interned in the Seoul municipal asylum where he had been taken after he had collapsed in the street. The only things he could recall at that time were his name, and the fact that he was a poet. Perhaps the second memory was the thread that kept him alive.

Deeply withdrawn though he was, Ch’ŏn Sang-Pyŏng showed a clear improvement after being visited by Mok Sun-Ok, the younger sister of one of his university friends. The doctor told her that she could help him by her visits and that if all went well he might be ready to return to life in the outside world after a couple of months. So Mok Sun-Ok came to visit her brother’s friend every day, until he was as ready as he ever would be to come back to life in society. Only it was clear that he would hardly be able to fend for himself on his own. He had the heart of a child, and a child’s fragility. Ch’ŏn Sang-Pyŏng and Mok Sun-Ok were married in 1972, a marriage that endured through twenty years of sometimes terrible hardship and struggle.

The poet’s love of company, his simple trust, and his enjoyment of a drink and a smoke, did not answer the question of how the newly-weds were to feed and house themselves. Friends helped Mok Sun-Ok open a café in a small room in the Insadong neighborhood of Seoul, much frequented by artists, writers, journalists and intellectuals. The name given to the café was Kwi-ch’ŏn “Back to heaven,” the title of one of Ch’ŏn’s early lyrics. The couple lived in tiny rooms in an old house on the outskirts of Ŭijŏngbu, to the north of Seoul.

By 1988, years of drinking had eroded the poet’s liver until at last a doctor told Mok Sun-Ok that her husband had reached the end of the trail, that he would never recover and she must prepare for the inevitable end. Another doctor, a friend of theirs, with a small clinic in the town of Ch’unch’ŏn, twenty or thirty miles outside of Seoul, decided to try to help. Ch’ŏn Sang-Pyŏng was admitted there and for the following months Mok Sun-Ok took the bus every evening to be with him. She has written how, returning to Seoul from her daily visits, she used to pray silently in the bus: “God! Not yet. Give him another five years, please. Five more years.”

Amazingly, strength returned and the poet was able to leave the clinic to resume a measure of normal living. For another five years. In the space of this reprieve he saw the publication of new volumes of poetry and of essays. Until at last he made his final journey Back to Heaven on April 28, 1993. People opening the door of the Insadong café no longer hear the poet’s raucous voice call from his customary seat in a corner: “Come on in, there’s room, there’s room!” Even when, with fifteen customers, the room was completely full.

And a poem by the man himself:

Soon the wind will blow from the northern hills
snow will fly; winter’s coming.

Even when I had nothing at all
I always had
this “next”
this dawn, this “next.”

I reckon this absolute irresistible urge
is all my own.

Soon, tomorrow
my dragging steps transformed
into something hotter than fire

my hope
will impose on the world a heavier burden
than the surf, than all the oceans.