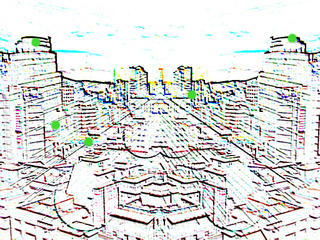 Although not a design concern of paramount importance, a practical application of the knowledge of memory and cognition as outlined in Chapter 2 can be found in the Xerox machine that our organization uses with alarming regularity. All functions are located within an entry pad, complete with a number keypad and color coded function buttons that have a singular purpose as defined by their color and symbol. Some functions are used with more regularity than others and are therefore more difficult to recall in the form of a simulation. There are very few buttons required to initiate any particular function, which alleviates any concerns over the perpetual memory trace fading and the Working Memory reaching capacity. Therefore, process of initiating a function is established as a cognitive process.

The most vivid illustration is the big green button which initiates the print function. Since it is the raison d’etre of the copier, the button is green and considerably larger than the other buttons due to the frequency of its use. Its color and size also makes it easier for it to be encoded as a cognitive process. Furthermore, once the green button is pressed, an audible sound is emitted, which signals that the process was completed satisfactorily by the user. If that isn’t enough, the light from the copier itself as it scrolls across the glass is also green, matching the color of the green print button, further establishing a connection between the physical and the logical and serving to imprint the process deeper in the perpetual memory. The matching of the green stimuli helps memory to make the transition from working memory to long term memory. At least for the purposes of our organization, the most difficult process is the entering of the personal identification code of the user, which we use to track the amount of copies made per person. This identification number is a sequence of 9 numbers. The fact that it is nine numbers implies that mistakes will be made as one attempts to move this bit of information from working memory to long term memory. However, we have found that chunking the information, as mentioned in chapter 2, leads to greater retention. Therefore, the following sequence:

can be redistributed as:

Experiences the situation where the first two numbers total the third, as is the case with 4+2=6. So, if the teacher cannot remember 426, then perhaps they can remember just the 6 and work backwards. By creating sequences in this way, the chunks of numbers are linked with other memory devices offering alternative methods of recall.
A further example can be found when the copier misfeeds or jams. The process by which we clear out the various nooks and crannies can be associated with the level of profanities cast at the machine. We are creating our own associations by which to recall the correct procedural information from long term memory to avoid it decaying in working memory.