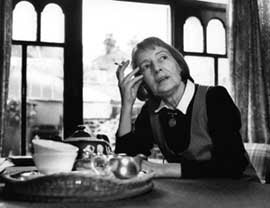 Nobody heard him, the dead man,
But still he lay moaning:
I was much further out than you thought
And not waving but drowning.

Poor chap, he always loved larking
And now he’s dead
It must have been too cold for him his heart gave way,
They said.

Oh, no no no, it was too cold always
(Still the dead one lay moaning)
I was much too far out all my life
And not waving but drowning.

This is a poem by Stevie Smith. It is rather somber, but it builds a nice crescendo towards the end. It is also the rarest of poems in that it ends with a bang, the climax is the final stanza. All too often, as is the case with me, people get too enraptured by the cadence of the words and lose sight of the meaning, words as conveyance of meaning. Stevie Smith did not and this poem is remarkable for it. Not waving but drowning is one of those absolutely classic lines that could apply to a dinner party as much as something more overtly dramatic as someone drifting out to sea.

I do like her wit as made evident by the following quote:
“If I had been the Virgin Mary, I would have said ‘No.”