In keeping with a previous post about my wife’s relative, 서상돈 (Seo Sang Don), here are a few more pictures for those interested in such things. These are from my wife’s family albums and they depict the Seo family in Daegu in the 1930s and 1940s.

The family enjoyed some degree of status judging by their attire (the tuxedos alone signal that). The older gentleman sitting in each of the photographs is the son of 서상돈. In the pictures from the 1930s he is wearing clothing befitting a certain status within Korea at that time.  In the picture from the 1940s, much of the family’s attire has taken on a much more Korean bent.

Terribly sorry about the big gap of space there, but I was proving too impatient to edit these photographs after scanning them. The picture below is (I am guessing) from the same photography shoot and there is some more extended family in this one, including my wife’s grandfather (in glasses, far right).

The final image is from the 1940s with the same location and most of the same people. This is post-liberation in the interim period between the end of World War II (and Japanese rule) and the beginning of the Korean War in June of 1950. According to my sources (my wife), one of the brothers (I want to say the man in the very back on the top far left) was taken back to North Korea during the war.

My wife’s mother is in the arms of her grandmother off to the right along with her grandfather (the man in glasses in the back row). He was a professor at Hanyang University (한양대) and historian.

Also of note in this photograph is the young Cathy Hardwick. She is a fashion designer in New York City and has been quite successful over the years. She can be found in the middle row, sixth from the left (not counting the baby).

I would be hard pressed to find media descriptive in its simplicity. A straightforward family portrait at the crossroads of so much history. Regal and modest; old and new; escaping from (Japanese occupation) and on the cusp of (the Korean War) so much turmoil. 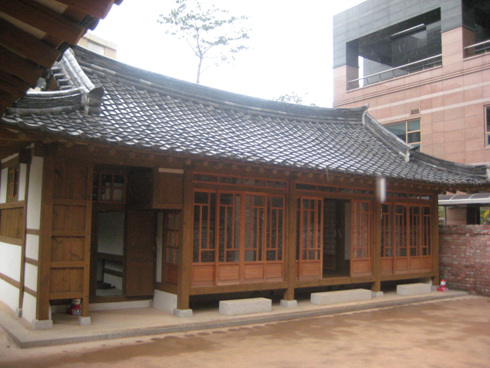 I found this on Oh My News! and I am fairly confident this is Seo Sang Don’s house, still preserved in the heart of downtown Daegu. I ask my few dedicated dear readers to compare this house with the house that acts as the backdrop of the very first picture in this post. Is it the same? I think I want it to be, but I am not sure.