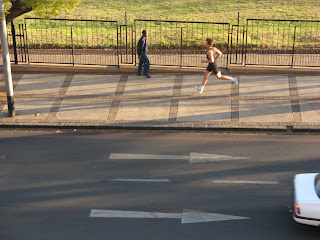 This guy could easily have been running for his life. I exaggerate slightly, but the level of crime was very palpable in South Africa. It will take time, I am sure, but establishing safety and freedom of movement in South Africa will only serve to increase tourism, trade, and general economic cooperation and inter-community development.
–
The staff at the hotels, the one in Durban in particular, were very wary of us walking around by ourselves. In some cases, they even escorted the female members of our congregation through the streets on simple errands (buy stamps, go to the pharmacy).
–
In Pretoria, in a certain entertainment district, people were paying guys loitering on the street to NOT damage and/or steal their vehicles. It was kind of like purchasing security by buying the criminals. I suppose if you can’t beat them….
Share :