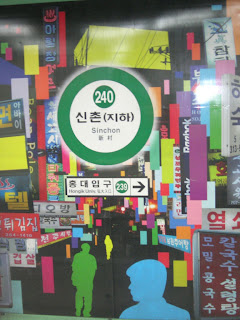 This is relatively interesting information from Wikipedia about the Seoul Subway Line 2, or the green line. It is a circular line and I have spent many many hours on it, always seemingly coming away from or towards Shinchon (I still use the old spelling). I got to familiarize myself with it, from a different angle altogether, when we moved to Gangnam that last year. It felt nicer south of the river for some reason, not unlike a lot of Seoul.

Line 2 was built 1978-84 together with the Seongsu Branch (the second Sinjeong Branch was built 1989-95). Dangsan bridge was closed for reconstruction in 1996 and reopened on 22 November 1999. The old steel girder bridge was replaced by a 1.3 km long concrete bridge between Dangsan on the southern side of the river and Hapjeong on the northern bank. Headways on the line can now be reduced to 30 seconds, off peak intervals 5-6 min. The line connects the city centre to Gangnam, Teheran Valley and the COEX/KWTC complex.”