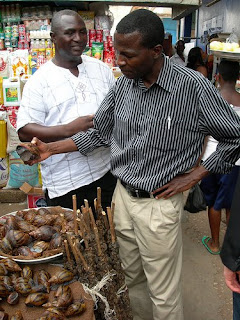 These were the largest snails I have ever seen in my life. We found these on the last day in Makola Market in central Accra. The market was exactly as you might imagine a market, loud, booming and full of exotic smells, sights, and sounds. The man in the picture is Dr. Siro Masinde, a botanist and Aluka’a African Coordinator. He was immensely curious as to the species of snail and did some research. See below for his comments. If you want to see all the pictures from the Accra set in Flickr, please click here.

“I have tried to find out the identity of the snails we saw in Accra market. They are scientifically known as Achatina fulica, and the common name is East African giant snail. I spoke to a Malacologist (snails specialist) at the Museum, who says that Achatina was introduced to East Africa and has since spread to many places. The internet literature that I have seen however claims that Achatina is native to East Africa – Kenya and Tanzania. The snail is however not traditionally eaten in East Africa, so it is interesting that West African people acquired such a taste for it. I have also learnt that the farming of snails is called heliciculture. Considering that the snails we saw were quite pricey, at about US$ 5 for those weighing about 250 – 400 grams, it may be a good idea to encourage their farming and consumption.”
Share :