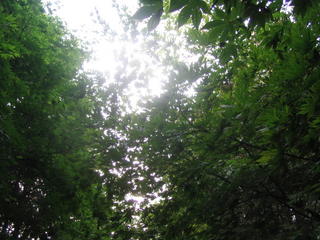 She mentioned to a colleague that
The toes and fingers were identifiable
And that bile was being produced along with urine
She beamed at the mere thought of another being
So closely resembling her
And rather unconvincingly, I smiled
And poured from the room with mock austerity
The trembling of my left hand firmly
Betraying the distance I felt from humanity
The distance I felt from my own

Sitting in the hard backed chairs of O’Hare
And, with proper posture, listening to Glen Gould
Audibly imagine the fear of incendiary bombing during a siege of an airborne zealot
My thoughts fell over the blackened hair of the people due to fly across the Pacific with me, over the Bering Strait, through Vladivostok and Japan
And the children in this particular crowd that might never be mine
A nameless sea of splitting organisms, halving themselves for the sake
Of security, lineage, love. Nameless by design, a penitence that springs
Deeper than multi syllabic monikers, they are reminders of an exile
I levied against my own being, ten years ago to the day
In a fit of progressive bewilderment,
As I responded, in haste, to the madness I saw in the statement
“She is producing bile…and urine”
or
“I know you waited for so long but…”
Share :