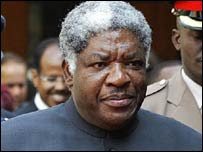 It does seem as though the President of Zambia has died for real this time, unlike the previous misreported passing. There is a bit of an excerpt below:

The Zambian leader, 59, was a favorite with Western donors for tackling corruption in the southern African country and he had been one of the strongest critics in the region of Zimbabwe’s President Robert Mugabe.

“Fellow countrymen, with deep sorrow and grief, I would like to inform the people of Zambia that our president Dr. Levy Patrick Mwanawasa died this morning at 1030 hours (4:30 a.m. EDT),” Banda said on state television.

“I also wish to inform the nation that national mourning starts today and will be for seven days.”
Banda is expected to take over as acting

Commence mourning good people of Zambia. Hopefully, this will be a peaceful transition, but Zambians come across as a relatively level-headed lot so I would be surprised if there wasn’t an easy transition.

You can read the full article via Yahoo here.